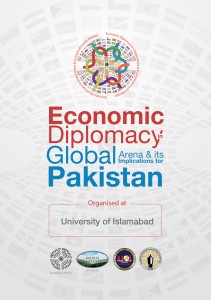 University of Islamabad, under the auspices of FAIRE, intends to hold a “Seminar for Economic Diplomacy in Global Arena & its implications on Pakistan” to recognise the opinion of state and non-state actors in diplomatic practices and to highlight the varied and changing character of diplomatic processes. We would like to take this opportunity to discuss various areas in the context of economic diplomacy and to develop an understanding of the relationship between the processes of globalisation, peacekeeping, academia, foreign trade and economy. The Seminar will encourage invited talks and plenary session between defence analysts, economic analysts, academic experts, and foreign policy experts and other state & non-state actors based on their perspective on the main theme.

Diplomacy is a domain of Political functions, which involves the process of communicating, negotiating, and sharing information between nations. Power has shifted from the political and military rooms to the economic spaces in International Relations. Economic Diplomacy is the use of state’s economic tools to achieve its national interests. In today’s globalised sphere, power means a nation’s potential to harmonize with the global economy. Therefore, economic diplomacy emerges as one of the most important elements of the foreign policy of all countries. Similarly, protection, independence, sovereignty and national integrity are the key elements of the Foreign Policy of Pakistan to achieve its national interests and goals.

Objectives of the Seminar

The following are the main objectives of the Seminar.

1. To create awareness of the economic diplomacy dynamics in order to protect and promote the interest of the state.

2. To provide a platform for healthy debate between intellectuals and think tanks to come up with a national strategy to counter internal and external threats.

Proposed Theme of the Seminar

The proposed theme of the Seminar is ‘Economic Diplomacy in Global Arena & its implications on Pakistan’.

Directions to the University of Islamabad 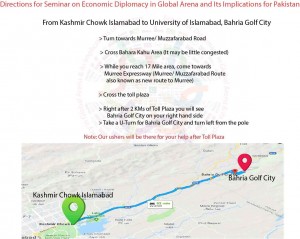